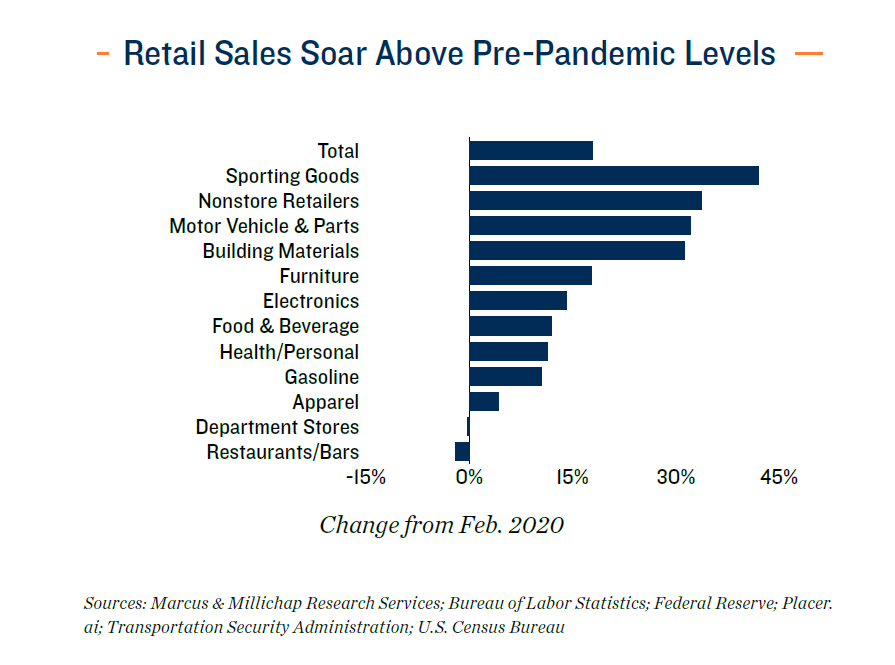 Retail spending levels off. As the stimulus dissipated, consumer spending dipped 0.8 percent in April as shoppers stepped back from record purchasing. Year over year, core retail sales jumped 37.6 percent, though the annual comparison comes against a backdrop of broad shutdowns in April 2020. Some of the slowdown can be attributed to a wide pause in reopening policy changes last month. Moving forward, however, several modifications are on the horizon that should propel consumer spending higher. Several states are terminating federal unemployment benefits sooner than the current Sept. 6 timeline, which should help retailers staff to today’s occupancy guidelines. Additionally, the CDC lifted mask restrictions for vaccinated individuals, which will relieve some uneasiness among those still taking extra precautions to avoid contracting the virus.

Retail real estate turning the corner. Although net absorption is expected to remain negative over the short term, the return of space to the market is largely aligned with terminating leases rather than newly shuttering stores. Retail establishments that have persevered through the health crisis have the potential to thrive due to pent-up demand. Competition is lower following the bankruptcy of some service-related firms, and additional traffic will boost sales in the coming months. Spending at bars and restaurants is only down 2.0 percent from February 2020, despite foot traffic being 15.6 percent lower. More visitors are expected as capacity ramps up.

Fundamentals hold up better than anticipated. Retail vacancy increased 70 basis points year over year to 5.7 percent in the first quarter despite the tremendous pressure placed on retailers during the pandemic. That figure is expected to rise, though the immense stimulus and support  provided to stores from the Fed and Treasury Department appears to have been more successful than projected. The health crisis may have “trimmed the fat” from bricks-and-mortar retailers rather than eliminating concepts that would have otherwise survived. However, local retailers without access to lines of credit have been disproportionately impacted despite federal intervention.